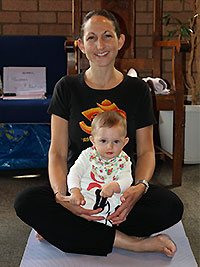 Jay qualified as a Hospital Play Specialist in 1994. She then set up a play specialist unit in Sydney, Australia before returning to London. It was here that her work spread into the field of positive touch in the Special Care Baby Unit. In 1997 she became a certified Infant Massage Instructor with the International Association of Infant Massage.

During 2002 Jay qualified in both infant yoga trained by Francoise Freedman, through Birthlight, as well as yoga for children with special needs with Sonia Sumar, from Brazil. In 2004 she qualified and received her Birthlight Perinatal Diploma and also undertook the Advanced 1 “Yoga for the Special Child” training. In 2006 she undertook Advanced “Yoga for the Special Child” levels 2 and 3 in Brazil and in 2007 completed the final Advanced Level 4 and qualified as an Integral Hatha Yoga Teacher.

Jay is trained in Makaton Signing to level 6 and the PECS communication system. In May 1999 she attended a Workshop run by the University of Halmstad in Sweden as part of a European Union project to create toys for use by children with special needs. During summer 2000 she received an award, which took her to the USA to undertake a research project on the need of touch in the Neonatal Unit and positive touch for teenage parents.

After giving twelve years to the National Health Service Jay worked in the community for three years as a teacher working with children and families with a variety of profound special needs. She also taught two very successful antenatal and baby yoga classes for Sure Start in two localities within Camden for 6 years, until sadly the Government funding ran out.

Yogababies was set up in 1999 and since its birth has taught thousands of parents techniques for more enjoyable pregnancies, better births and the joys and benefits of massage and yoga for their children. Jay regularly presents lectures and workshops on positive touch, baby cues and communication and yoga for children with special needs around the country and has lectured at many conferences around the world. She is also the Special Needs Baby Yoga Tutor for Birthlight and has designed and runs her own courses. She has also co-written a book on baby yoga with Francoise Freedman.

Jay currently teaches yoga to children with special needs in two special schools, private antenatal yoga classes, private and part-funded baby massage and baby yoga courses in various children’s centres around London. She also regularly teaches “breath and movement for birth” classes with the midwives at two major teaching hospitals in London as well as private birthing sessions for many of her students and their birth partners. 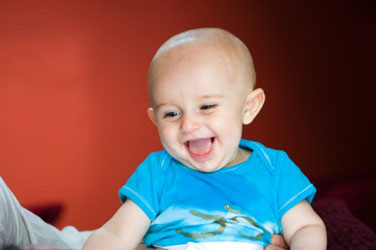 Jay radiates incredible positive energy and her classes leave you feeling much the same, my 10 month old daughter on the other hand always fell into a blissful slumber immediately after each session. It was important for me that my daughter got introduced to the concept of yoga at an early stage and in an environment where she could interact with other babies and mothers.

I really appreciated Jay’s teaching method which is deeply rooted in yoga and draws from her vast professional dealings with babies. She has set an atmosphere that is relaxed, informal and informative and allows each mother to voice concerns or share general experiences and advice.

Needles to say, I learned so much and feel much more confident in how I engage with Georgia. I’ve adopted many of the techniques taught in the class and even passed them on to my partner who’s grateful to have the skills to hand! Now, signing, inversions and sing-a-long’s have become a natural part our family communication.

Tuesday’s classes (not to mention the tasty treats provided) will certainly be missed but we’ve taken with us a wealth of knowledge and also, very happy to have bonded with a fantastic group of mothers and babies.

“Dear Jay, thank you for all your support and knowledge. Attending your class was the best decision I made about my pregnancy. I am now confident that my body is design to give birth and I trust myself much more then at the beginning. I gain extreme peace of mind that I have done everything I could to prepare myself and my husband for natural delivery. I will leave the rest in hands of higher powers. I can not wait for those exciting moments to come. Once again thanks for everything.”

“Dear Jay, on behalf of both Tom and I (and Ariana!) I wanted to thank you for your wonderful course. All three of us have enjoyed it so much and learned a lot. It has a lovely atmosphere and we really enjoyed meeting the other mums (and some dads!) in the welcoming setting that you create. There are so many things you can do with babies that are very formulaic and often money-driven and impersonal that the classes with you really stand out as being very thoughtful and caring. Tom was enjoying it so much that I think he may keep turning up uninvited…!”

"A big thank you Jay from Arthur and I. I would definitely recommend your classes to others. At a simple level- it is what it says on the tin!- though it is more than yoga and baby massage. You have provided a non-judgemental space within which we have forged crucial relationships that have helped Arthur and I navigate the wonderful and at times bewildering journey of pregnancy through to new parenthood."
Emma Cassidy-Ingles

"Jay has very good understanding of Lilia's special needs, both physical and her way of thinking. She conducts the session in a fun but firm way enabling Lilia to gain full benefit of yoga. Lilia enjoys her yoga sessions and is happy to practice at home independently. I am delighted with the progress she is making and grateful to Jay for opening the world of yoga for us."
Irina Porter, Lilia's mother

"Hi Jay, I just wanted to say a massive thank you for the course. It's given me some invaluable tools to keep Imogen happy and for us to add something different to our play. I also think I'll be using the special under arm hold technique till she's about 16!"
With love Ellen and Imogen x

"Hi Jay, Just wanted to thank you for the amazing Baby Yoga course - now I know why your classes are fully booked way in advance! You are a great teacher and we learnt so much, I'm sure it was instrumental in helping Raffi crawl. I will recommend you to other mums and hope to see you again :)"
Julia x

"Hi Jay. Thank you very very much for yesterdays course. It was the most physical and practical preparation we have done so far and somehow it makes me feel much calmer to know that I know what I can do and that Markus also feels somewhat prepared and has ideas about how to help."
Gwen 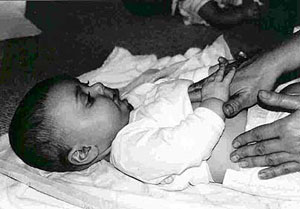 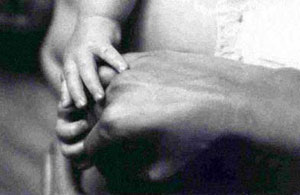 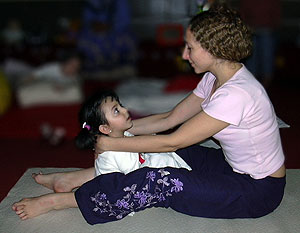 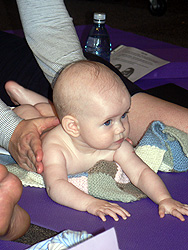 "Jay, I just wanted to say thank you for the baby massage class on Tuesday. It's really nice to do something with other people that's still baby focussed - a win-win situation for me and Emily."
Love, Anna

"I arrived at the first session hot and flustered and walked into a haven of serene tranquillity".
Hayley (mother)

"The course was very enjoyable and Joe and I loved it. Baby yoga gave me the confidence to do the stretches with him"
Michelle (mother)

"I can't choose what I liked best....the songs, all the baby yoga exercises and the way I left class feeling totally relaxed and unwound".
Julie (mother)

"After our fathers' yoga session my baby and I felt very close. We had done something together, intimate yet public. I hadn't expected much from the session but there was a definite bonding during and after it. I've been quite involved in baby care to date but feel that this was a bit different. My role had been more back up and this was a little adventure together. Padmini felt it and trusted me more in response."
Julian (Padmini's father)

"The fathers' session was maybe the first time that Julian had done something with Padmini, focusing on her for such a prolonged period. Since then she has been more crazy about him than ever and when he comes home from work she literally jumps up and down and yelps with joy!"
Christine (Padmini's mother).

"Thanks again so much for the baby massage course which Oscar and I just completed. We really enjoyed ourselves, and are continuing to benefit from everything we learned. It makes bath times a real pleasure for both of us (rather than the slightly stressful experience they were to begin with), as Oscar seems to relish the massage he receives after his bath. It was also lovely to get to know some of the other mothers in the group, and we are all planning on meeting up again soon.

My husband, Aneil, had a great time at the fathers’ session. It’s lovely to see how much his approach to Oscar has changed as a result – I even found him asking permission to change Oscar’s nappy."

"I just wanted to send you a quick email to tell you how much we enjoyed your wonderful baby yoga classes and how sad we are that they are over!

I am not sure quite where to begin as we gained so much over the last couple of months - not only did we both have a lot of fun (and I always left the class feeling a load better than when I arrived - usually late, stressed and tired with 9 months sleep deprivation under my belt!) but I have come away with so much that feels almost embedded in my subconscious now; I find myself naturally holding Noah in some of the positions you taught and, similarly, find myself randomly hanging the little man upside down in one of your inversions!!!

We both absolutely adored the singing and dancing (in particular the welcome songs, the hidey scarf song and the hokey cokey!!!) and our Tuesdays won't be the same.

You may remember that Noah sang and smiled his way through the last session on Tuesday - a sure testament that even a crazy 9 month old who doesn't sit still can enjoy baby yoga! Anyway, thank you - you and your yoga have left a lasting impression." 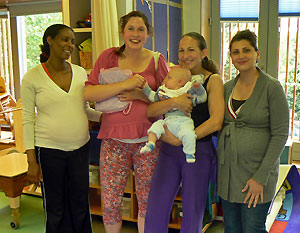